Congratulations to KMC Systems - winner of the 2016 PMI NH Project of the Year Award.

Founded in 1969, the Project Management Institute (PMI) delivers value for more than 2.9 million professionals working in nearly every country in the world through global advocacy, collaboration, education and research. Each year, PMI celebrates the best of the best in project management. Their professional awards honor organizations, groups and individuals "whose passion, talent and expertise make the greatest contributions to the project management profession".

The PMI New Hampshire Chapter is the recognized leader in New Hampshire for the promotion and application of Project Management and its principles, serving as a Center of Excellence for the state’s commercial and educational communities. Chartered in 2001, PMI New Hampshire is a nonprofit organization in the State of New Hampshire serving more than 806 members - 565 PMP certified. The chapter gathers for monthly meetings to exchange ideas, network with peers, and foster professional development.

KMC Systems is a proven engineering and manufacturing partner specializing in the development and production of complex, automated and integrated medical and life science instrumentation for the clinical environment. NH Chapter PMI President, Steve Lundquist, recently announced the winner of the 2016 PMI NH Project of the Year and presented the award to KMC Program Manager, Paul Dahlstrom. The award was announced with the following introduction:

“Congratulations to KMC Systems - winner of the 2016 PMI NH Project of the Year award. The original project charter described a project which was based as an off-shoot to an existing product with a modest development timeline and cost. During the planning phase of the project the resulting requirements described a significantly different product, with a significantly different cost and schedule. The project was further complicated by the involvement of three additional development partners spanning nine time zones and two continents. Since updating the project plan in accordance with the new requirements, all the teams have been executing on time and within budget to the plan.”

This is the second award received by KMC Systems for Project of the Year, after also winning the award in 2013. Congratulations KMC!

To learn more about KMC Systems, download the brochure and visit us at AACC2017, booth 5423! 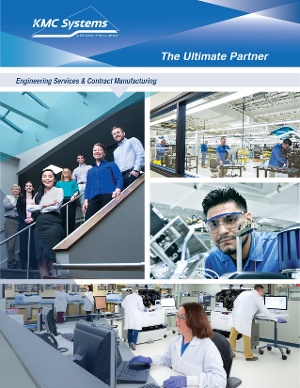